My brother followed my birth by five years. I now have to share a little, it does not always come easily, but I am old enough to feel that special bond between siblings and especially to experience the new arrival of a baby in our family.

Our home is appointed with modern furniture, whereas, my grandparents have “old furniture”. What people call antique today.

The sitting room has green furniture and a radio. In the dining room, a round table that would elongate on guests days. An imposing “vitrine” on the right side held my fascination. The teacups of transparent porcelain laced with fascinating motives. My mother Stella only opens it on special days when she wears her white scalloped apron.

The day my brother arrives in our lives:  My grandparents are present with us, and we are all gathered and seated on the green sofa. My brother is smiling, but also has just finished a feeding from my mother’s milk. He has a strange and unique smell that comes from his recent meal. As he smiles, more of it comes out on the corner of his mouth. That is my brother; that scent of baby’s milk and lactic acid and all of us adoring him.

My father loves music and has the voice of an opera singer. Music is part of my childhood everyday. Often, we have gathering on the large dining table for dinner and visitors would listen to someone who played the piano at the long concert piano. I am allowed during these musical assemblies, but the music permeated the entire house and Michael would play in his room and listen attentively.

At age seven or so, my parents decide to send me to the Conservatory to learn to play the piano. That day, I returned from a lesson with the piano teacher with a sheet of music going to the piano. I placed the sheet on the holder, where the harp is engraved in gold, and sit on the bench to rehearse my pieces. This is nothing new, but I am struggling with notes and had not done, as well as I should have during my lesson. I want to make sure next time I excel. As I sit down and start on the music time and time again, suddenly I feel something on my side. My brother Michael has climbed onto the bench next to me, his little hands reached for the notes. He started playing the piece for me.

What had just happened is something that will make me love my brother forever. This is one of those magical moments you always wonder if they truly happened. It remained our secret. He had an excellent musical ear, and it was clear would become a musician of talent.

The memory of this moment still brightens every dark moment of my present life. I feel that he is there helping me play those notes or resolve whatever difficult task I am trying to carry out.

Marion A. Stahl was touched by Anita’s story and inspired by her mission to teach about bullying and social abuse.

Marion   embarked upon the task to retrace events, paint surroundings, as well as beget the young girl to bring forth her voice again as well as her adult message: “Be a Hero.” “Stahl’s book will inspire young adults to learn about WWII history and how not to repeat it.” Lara Moore 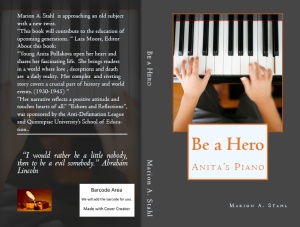 We live on Pelikanova Ulice (street) West of the Castle in a town house.

Not too far from our home the Špilberk Castle is overlooking the town. It has a park where I will play later.

The castle, built in the thirteenth century, held much history. It presided on the hilltop of the town of Brno, where I was born, in the southern Moravia, looking after the happy years of my childhood.

Many hundreds of years before I was born, in 1560, the town of Brno had bought the castle and made it into a municipal fortress.  My schoolteacher had told us, that the bastion fortifications of Špilberk helped Brno to defend itself against Swedish raids during the Thirty Years’ War, and then successful defense led to further fortification and the strengthening of the military function of the fortress.

I also learned that, after losing The Battle of White Mountain  (in Czech: Bílá hora) on November 8th, 1620 the leading Moravian members, of the anti-Habsburg insurrection, lived, imprisoned in Špilberk for several years. The battle marked the end of the Bohemian period of the Thirty Years’ War.

With all this history behind us, I felt safe. My family had lived in this town ever since my grandfather; Moritz owned his business in wholesale apparel.

We live west of the Castle in a town house. We are upstairs and my grandparents downstairs. My Grandmother, Gisella, loves to read. Every day I see her reading her newspaper. She wears fashionable clothes and smells of spices.  I relish her baked Strudels, those with apples or with mushrooms and red cabbage. She has a quiet smile and often gives me wise advice:

“Anita: You need to learn manners”.

I run out of the door. Of course, I am a bit of a Tomboy and do not care about manners. I am not fond of dolls either. I want to be a doctor, actually a surgeon.

My father works hard.  I do not see him as often, except on the weekend when we go to the club with my grandfather.  We belong to a Tennis Club. He is teaching me to play, but it is only a few hours a week.  I always look forward to the days we go. I have to wear a special tennis outfit.

I have great memories of learning to play with my father. I cherished those memories of those few hours a week. He held, at the time the highest place in my heart.

We do not live far from the river named Svratka that meanders through town. A steamboat also goes to the Lake, and we take it with my grandparents on Sunday sometimes often stopping at castle Veveří built by Duke Conrad of Brno.

Needless to say my perception of my childhood was surrounded with Kings, Queens and Dukes and could never prepare me for the events that will follow these happy years.

Darina Dvorak is a friend of the family a few house down. She and my mother are good friends. They speak German together. My mother is very fluent in it. She attended school in Vienna and has an accent, I used to make fun of..

Little did I know, I would live my entire life with one too.

Her family lived on the border next to Austria. That area is called the Sudentenland(1). People there speak German too.

Much was happening in our country during the years preceding my coming along. The Paris Peace Conference held in Paris in 1919 had approved the Czechoslovak Republic. The full boundaries of the country and the organization of its government were finally established in the Czechoslovak Constitution of 1920. During the years following this event, a renewed hope for peace and economic growth was in the air.

I am attending a secular school and enjoy learning. I have no difficulty in school, have B+ without trying. My teachers also are praising my attendance. Mrs. Vodka, that is what we call her, her name is probably Vodkta. She is tall and relentless about our good behavior. Isle is sitting next to me and we are drawing a map of Europe. A boy, sitting a few seats ahead has just sent his latest secret message in his fountain pen cloth blotter. When Mrs. Vodka is writing on the blackboard, I quickly pick it up.  A piece of paper inside the blotter is hidden and says: “Did you bring the sugar cubes?”. I jot down an answer. “Yes.” And slide the blotter back on the floor.

I remember a fair popularity among my school friends. By then my younger brother, Michael was born and must have been three or so..